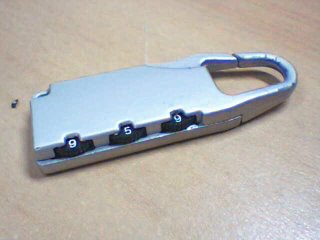 PC changed the combination to this lock a couple of months ago and I forgot to ask him what he'd changed it to. And now he's gone home. So today I sat down and starting from 000, tried every combination until I found the one that opened the lock. And that was at 959, if only I'd started at 999 and counted down.
Posted by Kashyap at 5:09 PM 4 comments:

Vihar lake and Powai Lake sandwich the IIT Bombay campus and while powai lake is small and dirty, Vihar lake is a mighty god awesome lake(that happens to be a prohibited area as it is the main source of water for the city of Bombay). Up until recently, there was nothing to stop us iitians from going to the lake (though it is illegal) and lots of us used to. However after a few panther/leopard attacks and other issues we've had a 10 foot fence separating the institute from its sylvan neighbours. In a month or lesser Vihar lake will get completely cut off from iit :(

Meanwhile, a few of us went swimming in the lake and here are a few photos of a place that only a few people have seen and fewer will ever get to see again.