I looked into my blogger dashboard today and saw a couple of unpublished drafts. Hilarious they were, both started off in such fashion that they seemed to be the products of a serious mind. But midway through they just die off and I end up postponing them forever. So I decided, I'd not leave them as drafts anymore and give them pseudo citizenship on this strange blog of mine.

The title is trying to state exactly the fact that these posts are rather abruptly interrupted and unpublished pieces of junkieness.

Interrupted on 22 May 2007
Disclaimer: This is to taken with a strong dose of nitrous oxide.

That's definitely what it is. It's an OCD. Of late, my life has had this constant obsession that is so entirely strange in its manifestation that I just cannot pin it down to a single real reason. Its just this thing that is such a constant and invariant that I find myself awake at completely unholy times of the night occupied with exactly that. And then it comes back at every other point of the day too, so much that the casual observer might think me mad. The only time when it subsides to bring me to seeming normalcy is when I'm involved in my first obsession in life, that of getting involved in the next person's work and dishing out completely unasked advice.

So what we have here are two bad obsessions instead of one. And with the combined effect that my normal life has to make way around them. So, here I am up at 5 in the morning pretending to work and instead writing up this completely questionable entry. :D Its now 8 in the morning and I'd fallen asleep for the last three hours unknown to meself.

The above paragraphs are so incoherent that I'm finding it hard to complete them. I'll post it anyway and wonder about correcting it later.
Interrupted on 30 March 2007
Given that the last post is dated Dec13, and indeed dated it is, a roundup of life is essentially long overdue. But then you might question the need to make what little happens in my life public by turning it all out on a closeted blog. So, given that I do not want to seem like a self-obsessed idiot who really can't look beyond himself and write something creative, let me try keeping the personal details to the minimum.
To make it interesting, let us chronologically reverse our events. I'd like to throw in some lexicographic sorting but I really have no idea what that is.

An obituary to the Indian team is mandatory I'd say. But, with the Indian public memory being short almost to the point of a really bad case of amnesia, I'd say that it won't be long before the team rises like a phoenix to defeat the next hapless team that dares step on our beautiful pitches.

So, a couple of weeks back I was rocking my head to IronMaiden at their concert in Bangalore. (Note my use of CamelCase, it is the result of excessive usage of Wiki for documentation). However, the very fact that I've not heard more than 3 songs of theirs ever meant that I was one more of the posers in the crowd. But, letting that fact alone, I'd still acknowledge that it was one crazy show and a magnitude more awesome than the simpler acts we see normally.
Posted by Kashyap at 12:54 AM 1 comment:

6 months! Its been that long since there's been something here. Well, not exactly, I did have a post in between on a rather interesting but strange topic which I tore down shortly after that. But yeah, it was rather irrelevant.

Some interesting facts
1) In 20 days from now, I actually finish an year of working here. Lot to look back upon and little to look back upon at the same time. I've grown in some ways and regressed in others. But all in all, it's been a happy jolly time with loads of money in the bank account :P More on this when I actually finish an year.
2) Our office has grown at an awesome pace and from where I started off in a lonely corner, we now occupy a whole floor of office space. And we have the obvious perks/pains of being the early birds. But yeah, being what I am, I try harder than I should to remain the dorky noob around :D
3) I bought meself a bike, and I ride about a reasonable bit. Done about 1440 kilometres in 75 days now mostly the daily trip to and fro office despite that we have a rather comfortable cab service at our disposal. As a side effect, I've tanned crazily especially given that it was the summer. 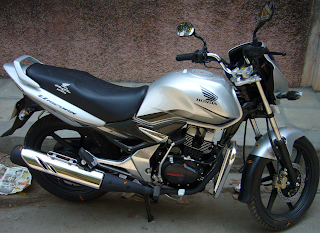 4) Meanwhile, I realised I've not entirely lost my hand at painting and sketching. And that I don't suck at it. The photo of the painting is not exceptional and is a little blurred and dull. Yeah, but it'll work. 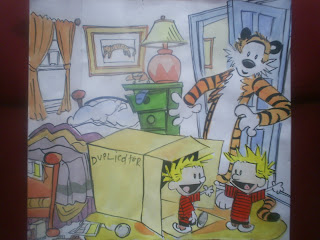 Lifewise, bunch of stuff has happened that doesn't really fit into blog pages like this. I've been up and down and around. The undergrad batch after me has passed out. And a bunch of freshers have joined us at work. My brother is now past two years at IIT and doing surprisingly well completely unlike me. Classmates, friends and cousins are moving on and ahead in life. I should also get a bit of my inertia out and make serious efforts to move on and up.
Posted by Kashyap at 2:54 AM 1 comment: