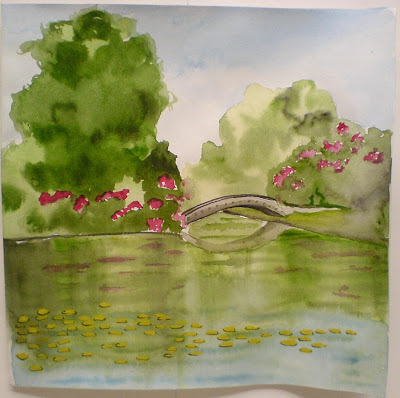 The passage of time seems to show scant regard for the fact that many schooltime summers were spent going to drawing classes. When you wake up one morning with the intent to put brush to paper to reproduce a color plate from a book on water-color painting, you realise you're still struggling with the same demons of color and water and brush that haunted those simple summertime evenings. The picture above came out as a result of a series of well-explained steps from a book on using water colors. By myself, scarcely could I have ventured into trying to do the whole water scene. But despite my best efforts, there are mistakes aplenty, though admittedly this is resultwise very decent by my standards. So yeah, all the junior artistness in the title is simply an assertion of the fact that I need to learn more painting :D 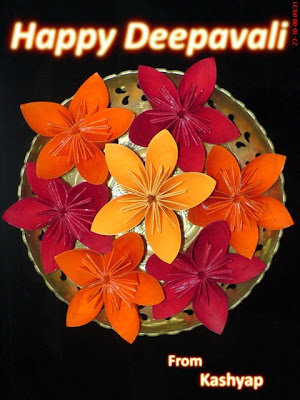 The origami flowers in the photo are called Kusadama flowers which I made out of sticky-notes painted over in fabric paints.
Posted by Kashyap at 11:35 AM 2 comments:

I wonder if Google needs help with pagerank :)
But no harm done adding another link I guess. Even if it has the tiniest weight ever. 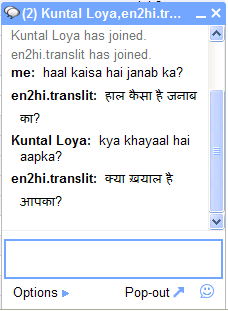 What are friends for?
Posted by Kashyap at 9:12 AM 1 comment:

Firefox3 has been out for a few days now and the beta's and rc's have been out for a while now. Somewhere along, I went into a addon finding craze(nothing unusual) and now that the dust seems to have settled a little, I thought I'd document it. In between, I went ahead and created a new profile for myself (this was after firefox3 had already taken care of doing whatever it needs to go import a firefox2 profile directory_ and moved my extensions over by physically copying them (yes, that works, just copy the extensions directory). Other things I copied over were my saved passwords (key.db and signons3.txt) and my greasemonkey directory. Of my addons only tabmixplus had any real settings that I made and these I got over by using its simple export and import apparatus.
That's the background, not really relevant, and largely just a blob of text. Now the promised list without any more digressions. Turns out I have a lot of disabled extensions which I'll list at the end.
Will have to take some time and put in links to each of these. Not now though.

British English Dictionary
No more color and humor, I want colour and humour
Download Statusbar
I never anyway have the download window popup when there is an active download. This addon makes that totally irrelevant now. Simple and concise in the statusbar.
DownloadHelper
One of the dozens of such addons for pulling stuff down from youtube and other sites for saving on your computer. Is effective, nothing else to be said.
dragdropupload
If you have to upload/attach files somewhere, simply drag and drop from your file manager. No more painful browsing.(don't know if this works on Linux though, I guess it should)
FireFTP
This one really shows Firefox off as a platform for applications rather than just being a web browser. A neat ftp client this is.
FireGPG
Sign and encrypt any text box, with special integration for gmail allowing for signed and encrypted attachments and simple buttons for the actual mail. Hail privacy!
Flashblock
Just what it says, block flash content and replaces by a button to turn on. Also supports url based whitelists. An essential addon.
Foxmarks
Excellent bookmark synchronizing addon. Essential if you have firefox running on multiple machines. And even otherwise, bookmarks are neatly backed up and accessible on their site once you login.
Greasemonkey
Greasemonkey scripts are awesome. And espcially within Amazon, we have loads to do neat little things the actual sites don't do.
IE Tab
An essential addon for you to view all those sites that dont work with Firefox right from within firefox. Microsoft sharepoint portals and exchange web mail are specially made for IE.
Indic Input
Awesome addon that lets you type in any of the Indian languages absolutely anywhere in firefox.
It's All Text!
It is so much more convenient to do text-editing from within vim. Used to use mozex earlier, but switched to this simpler addon.
PicLens
Another awesome cool addon. Turns firefox into an uber-cool 3d wall of images or videos when viewing picasa/flickr/youtube/google image search etc. Try it out, it will rock you.
Sage-Too
Most of my feedreading happens on google reader. But I've been a fan of Sage since IIT times when slashdot and digg were more important to me than email(sage-too is a fork of the original sage).
TabMixPlus
Brought the session manager to firefox ages ago and the tab and window features (and customizability) are something you can't live without after a while with this extension.
TinyMenu
The top menu bar in firefox is largely a waste except for the tools menu. This addon folds everything into a single list and lets you keep your chosen ones behind. And I've dropped my actual bookmarks bar and moved bookmarks into the menu bar.

All-in-one-Sidebar
This one is meant to be like opera's sidebar and is a huge hit. Maybe it works for others, but I didn't find much use for it.
Firebug
For the rainy day when I might need to do some web development. Not today though.
Flagfox
Knowing the whois information of the server and seeing the flag of the hosting country sounded like a cool idea.
NoScript
Meant to be the one-stop-shop for keeping your browser secure, and is a major hit addon. But I don't really visit too many strange sites that I don't trust. Or maybe I am not paranoid enough yet. Right now, it just seems to be a pain with having to click a button to whitelist each new site I go to.
SplitBrowser
Neat addon that does exactly what it says. Installed it at someone's suggestion. But didn't use it for a long time, so disabled it.
TamperData
Again for the rainy day when I might want to modify headers and data in my http or xmlhttp requests. Not today.

Roundup of bunch of things I've been upto in my spare time (and quite a bit of not so spare time). Almost none of this is original or ground breaking or anything like that, just a load of fun.

Chrooted Debian
For a long time now, I've yearned (like many others here at Amazon) for a linux distribution less older than dear old grandpa Redhat Enterprise Linux 3. So, ever since someone pointed me to a tutorial on setting up a chrooted installation of Debian Etch, I've been wanting it on my machine. So a couple of weeks ago, I went ahead and pulled Etch down with all of apt-get's greatness :)

Works great, a chrooted install sort of gives you the advantages of a virtual host(under any of xen/virtualbox/vmware) without the additional costs incurred in virtualization and running a whole os. So if you're okay with running on the same kernel (and instance) as the host os, a chrooted install is ultra neato.

However, one of my main motivations for finally doing this was to get firefox3 running. (it is impossible to run anything built on newer glibc2.4/kernel2.6 on the archaic rhel3)
However, debian etch is again an uncle among distros, but I have no other option since that's like the only one that still runs on kernel 2.4 and thus its binaries can thus run over rhel3, and the gtk+ version is about 2 minor versions less than what firefox3 needs :), and no ready backports available either :P. Back to square one. Anyway, I can live without firefox3 on my desktop for a while, as long as I have my winxp laptop for bootstrapping firefox :)

Anyway, the internal wiki link I used is not accessible from the internet. So here are the closest links I could find (and used too)
Webserving over a Dsl with help from Dyndns
Another something that I've wanted to do for a long time now is to get the dyndns/nat/webserver setup going over my dsl connection so I can put stuff up from my laptop/desktop. And I finally did that yesterday.

Installed Lighttpd from cygwin. Then went into my adsl router's settings and turned on the nat (my router has a very simple nat configuration where you can only specify one host where all traffic is routed to), and opened up the router's firewall to let port 80 through.
And i finally got myself an account on DynDNS and registered kashyapp.dyndns.org and am using their windows client right now to keep updating my dsl assigned ip on their server.

All set :) and I am serving out a small section of my photos.
Virtualbox
I tried installing virtualbox the other day on my laptop, but it would fail to install for some strange reason. Would go all the way to end and rollback silently. Poking around in the bios showed that 'intel virtualization support' was turned off and as soon as I enabled that, virtualbox installed itself. Yayy! Now, I want to try a minimal ubuntu on my virtualbox :D. And yeah, virtualbox is now The default virtualization solution on most linux distributions. Neat stuff.

More to write about:

Posted by Kashyap at 9:38 AM No comments:

Was over at Amazon's HQ in Seattle for a while in Feb. Was fun, got to meet the folks there, ran around one of Amazon's warehouses at Fernley in Nevada and met Nikhil Dasa, Rjain, Agp, Sudeep and Jha while visiting Stan, Berk and Uwash.

And forgive me for the blatantly bad misuse of the title.
Posted by Kashyap at 5:48 PM No comments: 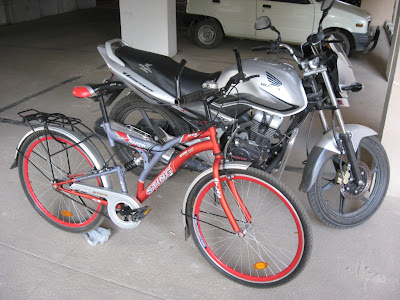 I have photos of my cycle and bike by themselves but none with both of them in it. The cycle's a little over an year old and the bike is a little under. But they are both a lot of fun.
Posted by Kashyap at 5:44 PM No comments: