Having switched out my company issued Thinkpad T400 for a Dell Latitude E6420, I've switched Eclipse to Idea and now Gnome-Do to Kupfer.

I love gnome-do, except that it is sometimes like an angry wife :-) . Shuts you out, pegs the cpu at 100% and makes everything a drag, all for no explicable reason. And so I decided to give Kupfer a shot having previously tried Synapse and not liking it much. And it's coming along good. Perceptibly faster than Do, hasn't hanged yet and I haven't yet missed any feature from Do. 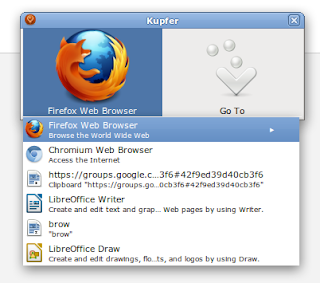 Ah except for, I'll have to admit, Do got me to the intended application faster. Based on learning my frequently used apps. Hope Kupfer gets that going too.
Posted by Kashyap at 11:15 PM